Today Dan and I were part of a life and death event on the farm with a chicken snake.

We returned home from running errands and checked the three areas where our hens like to lay their eggs.  One is in a large flower pot near the front door, behind two Devil’s Trumpet plants.  I asked a granddaughter, Casey, to check the pot for eggs.  She came back and said there was a large chicken snake eating eggs in the pot!  No wonder the hens were carrying on and squawking like crazy – the chicken snake had terrorized them.

Son David videoed the snake and waited on him to depart the pot, then dispatched the snake.  Those were the last two eggs that snake would have for breakfast at Scurlock Farms!

Another favorite spot is in a 33 gallon trash can with leaves (they began laying in the leaves before I could empty the can).  The last is in a very small area on the back of Dan’s work bench, on top of a bag of red hand towels.  This has now become the favorite laying spot.

The hens do have a nice hen house that they sleep in.

We close them up every night in order to prevent the chickens from becoming dinner for a possum, raccoon or skunk.  I forgot to close them up one night, and our first rooster, Moe, got eaten.

The hens much prefer to find their own egg-laying spots rather than the nest boxes that we have provided – independent creatures!!  We knew the egg production had dropped off the last 2 or 3 days and I had mentioned to Dan that I bet we had another snake.

Dan noticed a slithering motion on his work bench as he checked for eggs.

I was still getting out of the car when he yelled to bring a hoe!  Another chicken snake had discovered this nest and had already devoured the eggs that were in it.  As the snake slithered behind the work bench, Dan noticed a lump or bulge near its tail – egg.

The snake disappeared and we could not see it under the work bench or closets on either side of it.  I suggested maybe the snake had gone into a drawer or the cabinet under the bench, so Dan began opening the drawers – no snake.  When he opened the lower door to the workbench, there was the snake coiled up on top of containers of antifreeze and windshield cleaner.

Still being the Boy Scout he grew up as, Dan was prepared this time.

He had purchased some rat shot for his 357 pistol.  I got the pistol for him (and his headphones) and he was able to dispatch the thief.  That made the 6th chicken snake this spring!

A few days later, Dan returned from town and again checked the nest on the workbench.  Wouldn’t you know it, ANOTHER snake had just swallowed another egg, and the egg was right behind the snake’s  head.  I was not home, so Dan ran into the house to get his gun and headphones.  When he got back to the nest, the snake had spit the egg out! and was long gone!  Dan got #7 a couple of days later, back in the hen house at dusk as he was closing the hens in for the night.  We may still have another one that will raid the eggs on the work bench.

Dan’s ears are still ringing from shooting the first chicken snake inside the metal, low-roofed hen house with the 357.

Lesson learned, hence the noise-cancellation headphones and he just had his hearing checked.  He has loss in his right ear, but not enough to need hearing aides yet – whew!!

Now our egg production is back up to normal. 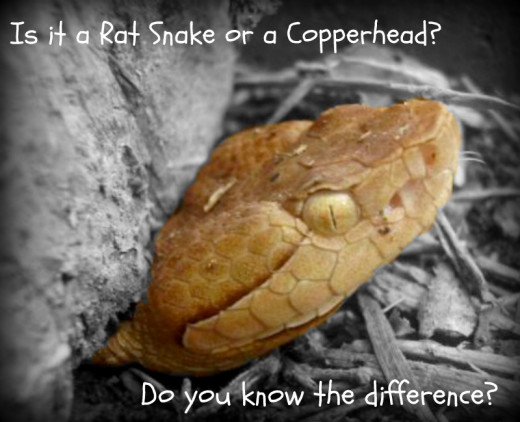 If you live in an area where copperhead snakes can be found, you need to educate yourself on how to recognize one. | Source

In my area of Texas, we have both rat snakes (also called chicken snakes) and copperheads. There are times when it is hard to tell: Is it a rat snake or a copperhead?

Living in balance with nature can offer some challenges. Here, we try not to kill snakes unless they are a threat to us or our livestock. Snakes are a great help in dealing with rats and mice, and they’ve provided the material for many of our homeschool lessons!

Often people kill snakes for no real reason except ignorance and fear. This isn’t good because snakes provide a valuable service to the homesteader by keeping small rodents in check. A large snake lives under our barn, and I have not seen a mouse there in awhile. We do try to discourage snakes around the chicken coop because the snakes love those fresh eggs as much as we do. If we go for a few days without seeing an egg, then we know we have a reptilian visitor.

It is startling to walk into the chicken coop and come face to face with a large rat snake, especially since they often look very much like a dangerous copperhead. How does one recognize which is which?

Differences Between Rat Snakes (AKA Chicken Snakes) and Copperheads

We have never seen a copperhead snake at Scurlock Farms.  A friend posted a photo of a “Copperhead” found at her home, but it was a chicken snake.  The biggest differences are length and pupils.  Friendly snakes have round pupils, venomous ones have slits for pupils.  Now, I know you don’t want to look that closely at a snake to tell the difference! 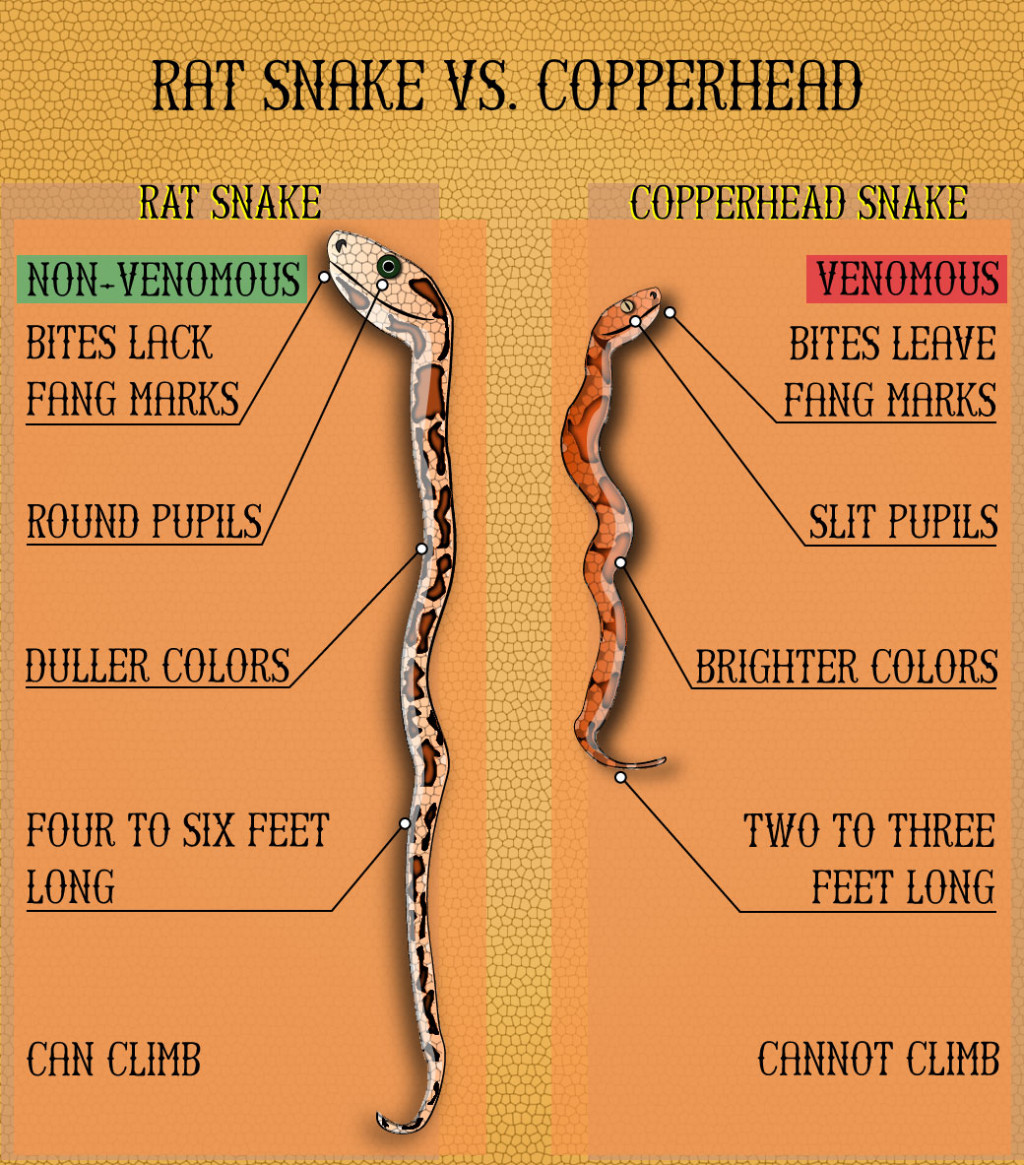 A couple of funny stories about Daniel and David, our sons, and Carl Barho, a good friend, with a chicken snake.

Dan and the boys were trimming and pulling English Ivy out of a small grove of live oaks in front of our front porch.  Daniel came across a large chicken snake in the tree, and he baled off the roof!  I assume the chicken snake was looking for a nest with baby birds in it.

Carl Barho, was terrified of snakes and he did not mind telling anyone that.  One day he and my dad were walking outside and Carl stepped on a twig.  Of course, he assumed it was a snake, and he LEVITATED off the ground!

Tell us about your last snake sighting – friendly or unfriendly?  Funny or unfunny? We would love to her from you!

We were looking for a getaway that wasn't a two to three hour trip away from Round Rock. We found Scurlock Farms and decided to book our trip through Air BnB. Sheron called us that day and let us know that they had their own website where we could have booked for a lot cheaper. I canceled and booked directly through her! She saved us almost $100 (that's true customer service). We arrived at the beautiful Palette Pad, and made ourselves at home. It was very cozy and we lit a fire in the fireplace to enjoy the ambiance as we read up on the history of the house. Sheron called and came down to bring us some necessities (coffee and matches) , she gave us a rundown of the entire place and gave us tips for finding arrowheads (which we actually found one!). The San Gabriel is a short walk through the pecan orchard and it was incredibly peaceful to sit and watch the river go by. Scurlock Farms also has a small roadside stand where the sell delectable chocolate covered pecans, jams and salsas. They had run out of fresh eggs, but Sheron said she would grab what the chickens had laid and brought them by the Palette Pad. I can't not say enough about the wonderful hospitality of the Scurlock's and how beautiful the farm is just 30 min outside of town. I would absolutely stay here again and plan on it in the near future!

Scurlock Farms was one of six farm and ranch stay venues from the Southwest that were chosen to be featured in SOUTH | Summer 2017! » View us on page 62 here.